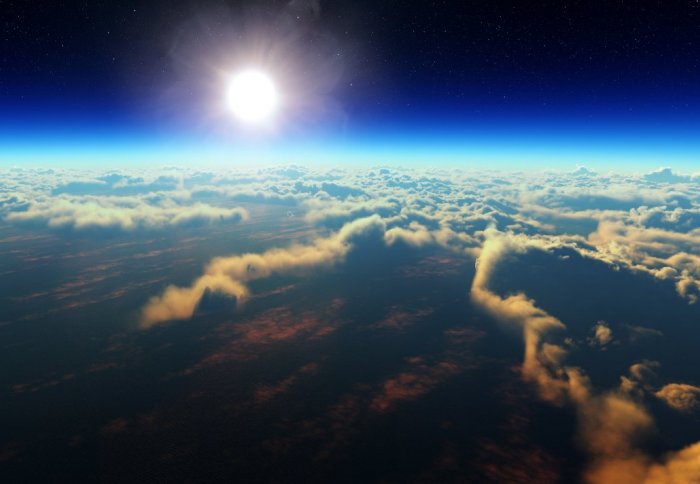 Have you ever noticed what happens to your cup of hot chocolate when you walk away?  It cools down, right?  Similarly, everything in the universe does the same.  Think of anything you want: your car, dog, even that fluffy bunny.  If they have a temperature, they generously share that heat with the rest of us.  It’s called radiation, and we’re all doing it, all the time.  The hotter you are, the more heat you radiate away.  In fact, if one object is twice as hot as another, it actually radiates 16 times as much heat away!  The sun is REALLY hot and radiates a lot of energy, which the reason we have this comfortable planet to live on.  The surface of the earth absorbs much of the sun’s energy and, in response, it warms.  As it warms, more heat is radiated away until it reaches the temperature where the radiation from the surface matches the energy absorbed from the sun.  Not all radiation is created equal.  Hotter objects also radiate different types of light.  As an object warms, it tends to radiate more of the super fast, short wave light (UV) and less of the slow, long wave light (IR).   At the sun’s temperature of around 5,000 Celsius (9,000 F), its favorite type of light is that middle ground, what we call the visible spectrum, from red to blue.

Wondering what role the atmosphere plays in this energy balance?  Like the surface, the atmosphere is hungry for energy and absorbs whatever light it can.  Those nimble short waves waves from the sun are tough to catch and slip right through but the big and slow IR radiated from the surface is easy prey for the atmosphere, and much of the radiation leaving the earth is trapped by the atmosphere and sent back to the surface, resulting in more warming.  That’s what we call the greenhouse effect.  It’s also the reason your car gets so hot in the summer – visible light sneaks right through the windows and heats the seats, which radiate IR light – which doesn’t sneak through the windows but instead remains trapped inside.